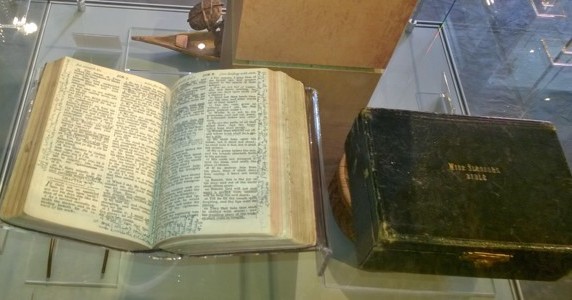 The year 2015 marked the 100th year anniversary of Mary Slessor's death. Mary Slessor was born in Aberdeen, on 2nd December 1848, and grew up in a slum area known as Mutton Brae (part of the former Parish of Gilcomston) beneath the shadow of the Triple Kirks (Free Church) on the east bank of the Denburn (now covered over) opposite Corbie Haugh (now Union Terrace Gardens). As one of six children she attended Belmont Street United Presbyterian Church (now Nandos restaurant).

After the family moved to Dundee when she was age 11, she became a mill girl in the Baxter Brothers' Jute Mill and a Sunday School teacher. Inspired by the example of David Livingstone from the mill at Bothwell, Lanarkshire, she made her way to West Africa on the S.S. Ethiopia on 5 August, 1876, aged 28. Despite bouts of illness, including malaria, and living in constant danger, she lived with the tribes in Calabar and learned their language and traditions. She became known as the 'white queen of Okoyong', recognized for her determined work and strong personality which earned her the respect of local African tribes, spreading Christianity, and promoting women's rights. She put an end to some of the practices such as the killing of twin girls, indeed adopting many of them who had been left to die. To them she was "Mother of All The Peoples" or, more simply, "Ma".

When Southern Nigeria became a British Protectorate, she became the first ever female Magistrate in the British Empire and a skillful diplomatic emissary. She died on 13 January 1915, aged 67, after 38 years of dedicated service. She is presently on the £10 banknote issued in Scotland by the Clydesdale Bank.

Mary Slessor clearly lived according to God's requirements for his children which are; to show mercy, act justly and walk humbly with our God. Her understanding of God's requirements underpinned all that she did. She left the comfort of the known for the uncertainty of coastal communities of the south eastern part of Nigeria where she saved countless lives and worked to improve the lot of women.

Crown Terrace Methodist Church decided to run a series of events to commemorate Mary Slessor's life which was lived sacrificially and to support causes we believe Mary would have believed in. The overarching theme of the series is 'Justice in the name of God' based on Micah 6:8. We hoped that these activities would provide a small glimpse into Mary Slessor's life and inspire participants to step up and do more in the name of God.

Half of the money we raised as part of the Mary Slessor Project was sent to CEE-Hope Nigeria (Centre for Children's Health Education, Orientation and Protection) and used to fund a seminar for girls on 'Guard Against Rape' in Ogba, Lagos, Nigeria on Saturday February 13, 2016. This brought together about 100 at-risk girls from six impoverished communities across two Nigerian states of Lagos and Ogun. It also attracted six renowned trainers, child rights activists and anti-rape experts who took time to sensitize the girls on the need to avoid rape.

The other half of the money raised was sent to Chain-Of- Happiness, a charity organization which primarily focuses on Junior High Schools in the coastal areas of Accra, Ghana. Parents of these children are mostly "fisher-folks", usually with little or no formal education. Chain-Of- Happiness provides a mentoring platform, where successful professional adults engage young persons, particularly adolescents and teenagers in order to nourish their thoughts and aspirations, and mentor them into creating and focusing on a chosen career. This is achieved by career counselling sessions organized to speak to the children. A one-on-one platform is also created for children with specific needs. Chain-Of-Happiness also supports financially under privileged children who have had outstanding grades in their Basic Education Certificate Examinations, into their first year of entrance into Senior High Schools.